Madras, Ore. — Disappointing returns of spring Chinook salmon are the norm across the Columbia River basin this year, including returns at the adult fish trap just below the Pelton Round Butte Hydroelectric Project, near Madras, that are the lowest in years. But there’s a twist: Despite the poor returns, biologists at the Pelton trap report this is shaping up as one of the best years so far for returns of reintroduced spring Chinook that originated in Deschutes River basin above the hydro project.

“This is exciting,” said Megan Hill, the Portland General Electric biologist who leads the fisheries and water quality team at the hydro project. “With the odds stacked against the fish this year due to ocean and river conditions outside the basin, the fact we’re seeing relatively strong upper basin returns is likely directly related to improvements we made in juvenile downstream fish passage two years ago.”

PGE and their co-owner at the hydro project, the Confederated Tribes of Warm Springs, are working with dozens of partner organizations and agencies in the Deschutes Basin to reintroduce salmon and steelhead runs that were cut off when Pelton and Round Butte dams were built in the 1950s and ‘60s. Given the long lifecycle of these migratory fish, it can take from two to four years for changes made to help the fish to show results. It’s a long-term project and runs cannot be expected to be self-sustaining for decades to come.

While more than a million juvenile fish have successfully passed downstream since PGE and the Tribes completed a new fish passage system at the dams in 2010, adult returns have been slower to recover than initially hoped, with a combined annual total ranging from 72 to 620 Chinook, sockeye and steelhead. The strongest individual run occurred in 2016, when 536 upper basin sockeye returned to the project.

Two years ago, dam operators made changes to improve smolt survival by collecting and releasing juvenile fish at night, when the fish are most active and less vulnerable to predators. Last year just five upper basin spring Chinook made it home, but this year a total of 46 have completed the trip so far and have been released to spawn in the Deschutes tributaries above the dams. This even though the total return of spring Chinook – including fish that originated at the Round Butte Fish Hatchery – is less than a third the size of last year’s total return.

Of the 46 upstream fish that have returned, five have made their way up Whychus Creek, near Sisters, where they have been tracked to locations in restored salmon habitat along the creek that is protected by the Deschutes Land Trust at Willow Springs Preserve and Rimrock Ranch and, just above and below the Land Trust’s Camp Polk Meadow Preserve. This is the largest number of adult fish that have returned to Whychus Creek in any year of the restoration effort so far.

“The Land Trust is thrilled to have the first Chinook make it back to our Willow Springs Preserve! We’ve worked for more than 20 years to ensure the lands and waters of Whychus Creek are protected so native fish like Chinook will always have a place to come home,” said Brad Chalfant, executive director of the Deschutes Land Trust. “It’s heartening to see that our collaborative efforts with PGE, the Confederated Tribes of Warm Springs, the Deschutes River Conservancy, and the Upper Deschutes Watershed Council are helping protect and improve habitat and water quality for native fish.” 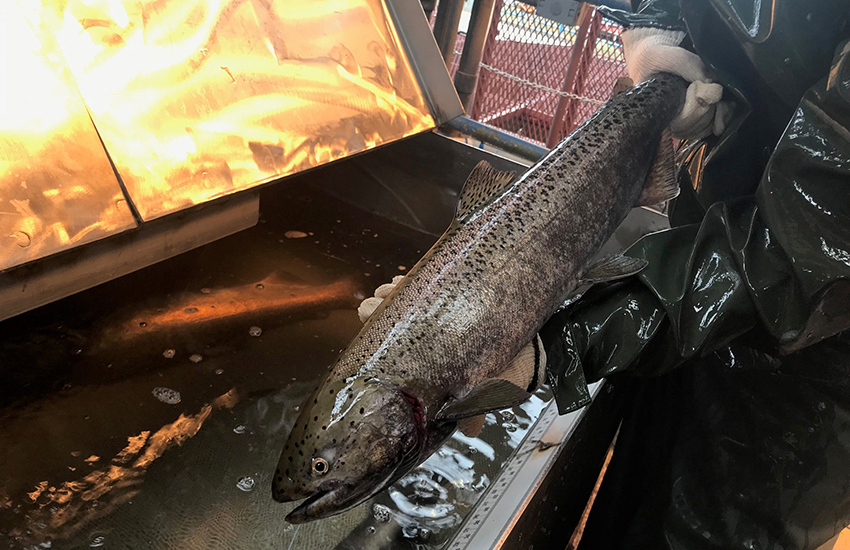 More information and regular updates on the work of restoring salmon and steelhead runs on the Deschutes is available at www.PortlandGeneral.com/Deschutes.

Portland General Electric (NYSE: POR) is a fully integrated energy company based in Portland, Oregon, with operations across the state. The company serves approximately 900,000 customers with a service area population of 2 million Oregonians in 51 cities. PGE owns 16 generation plants across Oregon and other Northwestern states and maintains and operates 14 public parks and recreation areas. For over 130 years, PGE has delivered safe, affordable and reliable energy to Oregonians. Together with its customers, PGE has the No. 1 voluntary renewable energy program in the U.S. PGE and its 3,000 employees are working with customers to build a clean energy future. In 2020, PGE, employees, retirees and the PGE Foundation donated $5.6 million and volunteered 18,200 hours with more than 400 nonprofits across Oregon. For more information visit portlandgeneral.com/news.

About the Deschutes Land Trust