Deschutes Fish Runs
Trends and timing of fish migration on the Deschutes River.

The Deschutes River is home to migrating salmon and steelhead virtually year-round. The chart below shows typical migration patterns and the months when runs peak. For up-to-date numbers, see Daily Fish Counts. 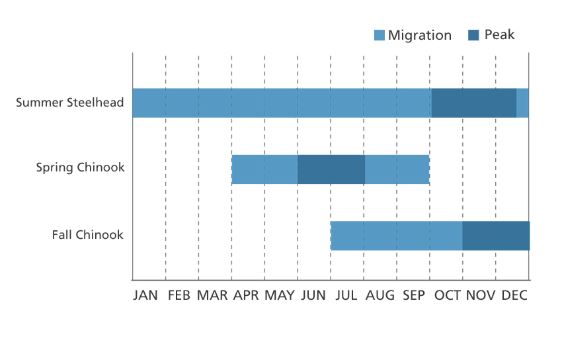 Sockeye salmon were historically present in the Metolius River basin before construction of the Pelton Round Butte Hydro Project.

Since the completion of the Selective Water Withdrawal fish collection facility in December 2009, migrating juvenile sockeye have been passed downstream of the hydro project to continue their journey to the Pacific. Adult sockeye from the upper basin began returning in 2011. The first adult sockeye begin returning to Pelton in July, and the run peaks in August. All upper basin Sockeye adults are captured below the dams and released into Lake Billy Chinook to continue their upstream migration. 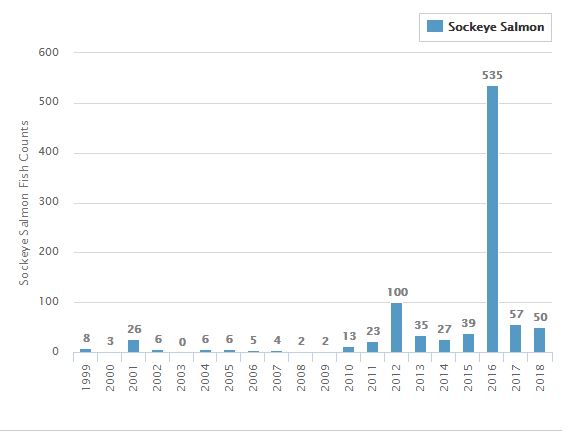 The Deschutes supports a healthy population of summer steelhead. Adults return after either one or two years in the ocean from July through October. Deschutes steelhead hold through the summer and fall in the main river where they provide abundant angling opportunity.

Peak upstream movement over Sherars Falls (about 10 miles below Maupin) normally occurs in September. Peak counts at the Pelton fish trap normally occur in December and January. The hatchery program for summer steelhead has been very successful.

Spring Chinook salmon enter the Deschutes River in April and May, ascending rapidly into upstream areas of the Warm Springs River and into the Pelton fish trap at the regulating dam.

The run peaks at Sherars Falls during the first part of May and in early June at the Pelton fish trap. Approximately 30 percent of the run is caught in a concentrated fishery at Sherars Falls. In addition to an intensive sport fishery, Native Americans from the Warm Springs Reservation fish with traditional dip nets at Sherars Falls.

Spring Chinook originally spawned in both the upper Warm Springs and upper Metolius Rivers. With the failure of downstream migration from Lake Billy Chinook, the portion of the run produced in the Metolius River was transferred into the hatchery. Beginning in the late 1970s, changes were made in the original rearing program that has resulted in record runs in recent years. 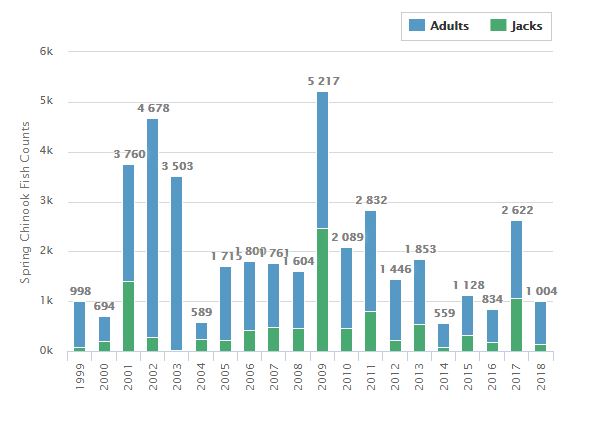 A run of wild fall chinook salmon spawns in the main stream between the Pelton Regulating Dam and the Columbia River. Early-bright adults pass Sherars Falls as early as the Fourth of July, with most of the sport catch occurring in August and September. Fall chinook caught in the Pelton fish trap are returned to the lower Deschutes River to spawn in the wild. 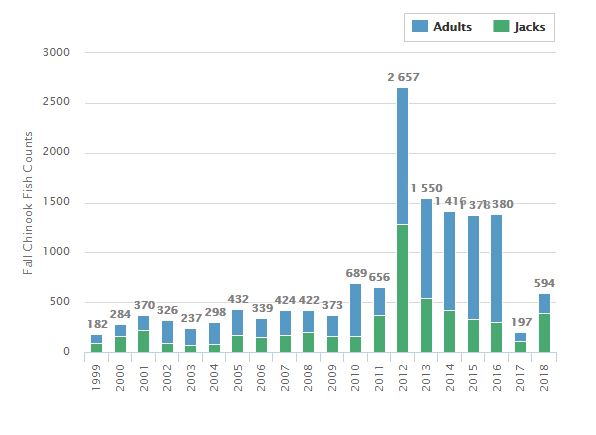