Trends and timing of fish migration on the Clackamas River

The Clackamas River is home to migrating salmon and steelhead virtually year-round. This chart shows typical migration patterns and peak run timing — the best time to schedule a fishing trip on the Clackamas. For up-to-date numbers, see Daily Fish Counts. 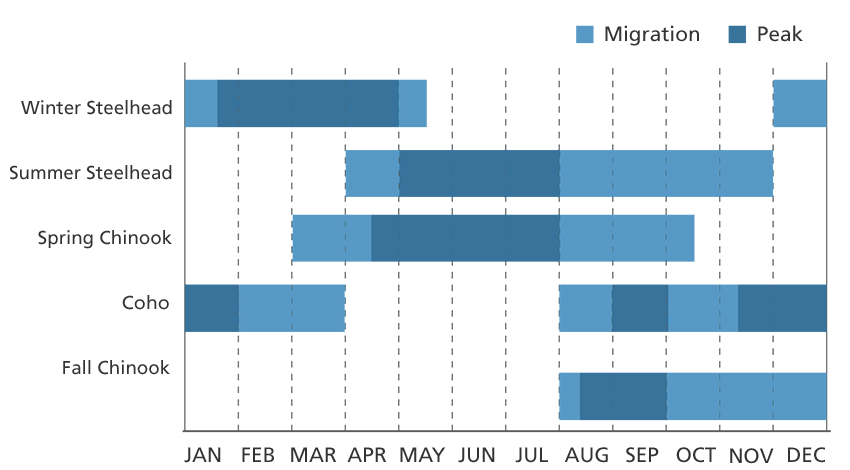 Summer steelhead were first introduced to the Clackamas River in 1970 to enhance sport fishing opportunity. While a few fish enter the river as early as February, larger numbers are not observed until mid-April. These fish spawn in January and February the following year.

Since 1998, summer steelhead have been acclimated or stocked in the lower river. This change has significantly reduced the number of adults returning to the North Fork fish trap. At the Oregon Department of Fish and Wildlife’s (ODFW)’s discretion, PGE transports summer steelhead captured at the North Fork fish trap back to the lower river, or outplants them to Faraday Lake to enhance the fishery. 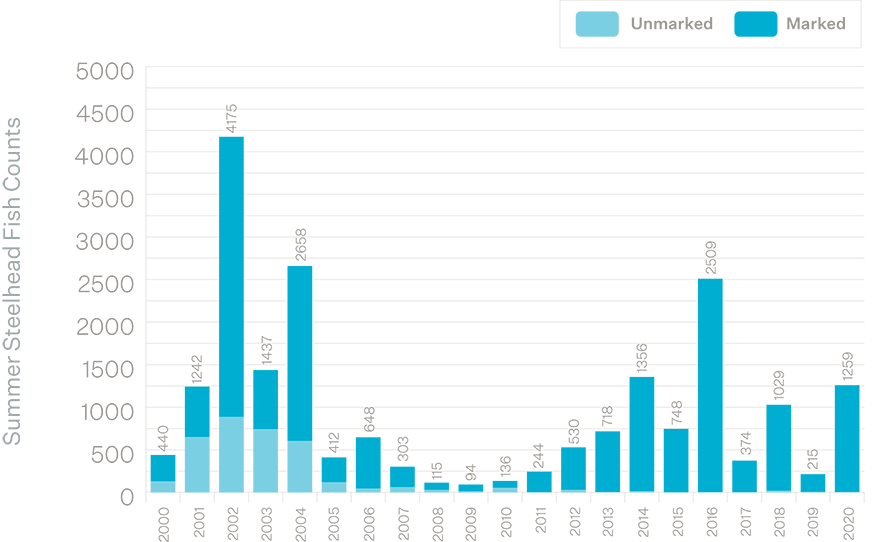 Please note that this chart shows only the North Fork fish trap counts; it does not reflect the total summer steelhead returns to the lower Clackamas.

About 7% of returning adults are repeat spawners – fish that migrate to the ocean after spawning and return the following year to spawn again. Migration over North Fork Dam occurs mostly in March and April, with fish spawning from late March to mid-June .

The Oregon Department of Fish and Wildlife also runs a steelhead hatchery program. This hatchery stock was derived from wild fish captured by anglers and PGE facilities. Return timing is similar to the wild stock and much later than the early-run stock used in previous decades. Hatchery winter steelhead are marked with an adipose fin clip and have not been passed upstream of North Fork Dam since 1996. At ODFW’s discretion PGE recycles hatchery winter steelhead to the lower river to enhance the fishery 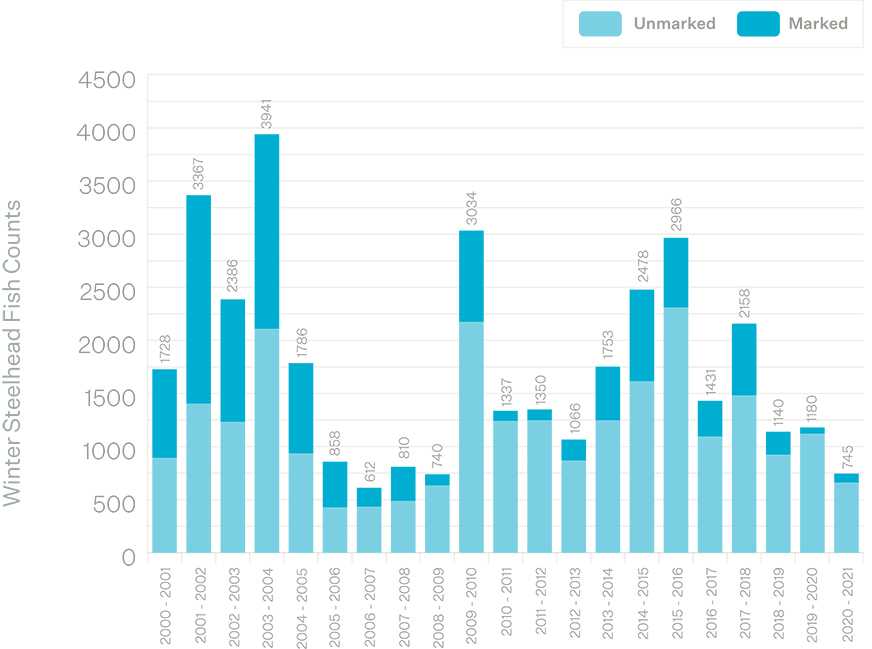 The Clackamas is home to the healthiest population of wild coho in the lower Columbia River. Wild early-run fish, descendants of historical hatchery production, begin to enter the river in August, spawning in October and early November. Most of these fish are 5 to 10 pounds, with the hatchery component bound for Eagle Creek National Fish Hatchery. Natural reproduction takes place in the lower river tributaries and upstream of North Fork Dam.

Late-run coho are the native stock to the Clackamas River. Most of these fish spawn upstream of North Fork Dam, with some reproduction taking place in the lower river tributaries such as Clear Creek. These fish are typically larger than the early-run coho, averaging 8 to 12 pounds, with some as heavy as 16 pounds. They enter the Clackamas from November through January and spawn from January to April. 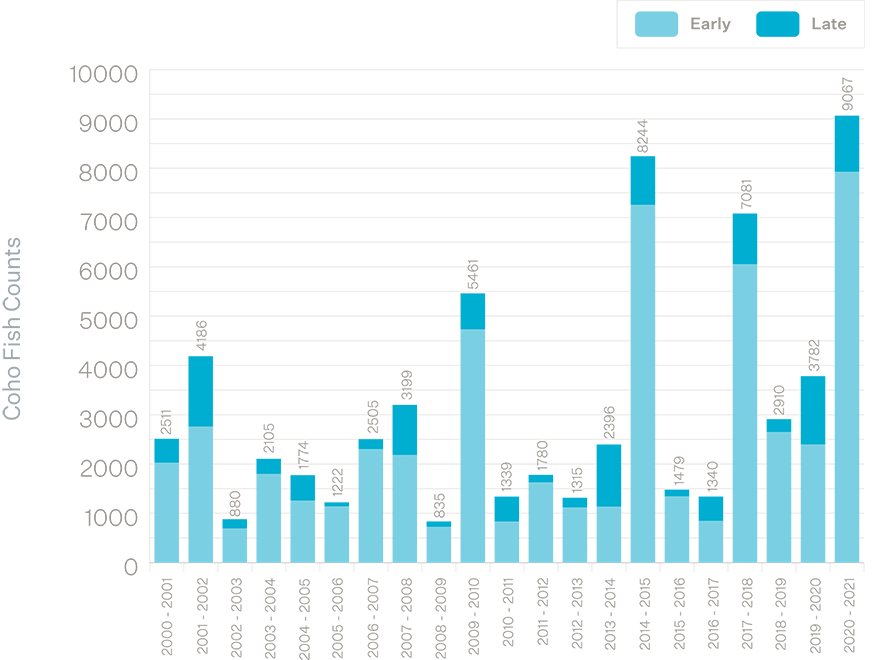 The Clackamas River once produced large numbers of spring Chinook salmon. Over time, wild populations declined due to commercial fishing, egg-taking operations, and the failure of the Cazadero Dam fish ladder from 1917–1939.

The Oregon State Game Commission (now called the Oregon Department of Fish and Wildlife) trapped Chinook at Cazadero and River Mill Dams to be used for hatchery broodstock. After reconstruction of the fish ladder, the remnant population from the lower river recolonized the upper Clackamas.

More recently, Clackamas spring Chinook were supplemented with Willamette River hatchery stock, which have been released in the basin since the late 1950s. In 1980, the first adults began returning to the newly completed Clackamas Hatchery at Milo McIver State Park. This hatchery, which is partially funded by PGE, currently releases 1.2 million smolts into the Clackamas River.

Spring Chinook returns to the Clackamas River have been on the rise since 1980 and now represent the healthiest population of wild spring Chinook in the Willamette Basin. From 1980–2003 returning hatchery spring Chinook were passed upstream of North Fork Dam to rebuild the population. Since 2003, only unmarked Chinook have been passed upstream of North Fork Dam. A majority of Chinook return to the river after 2 or 3 years in the ocean. 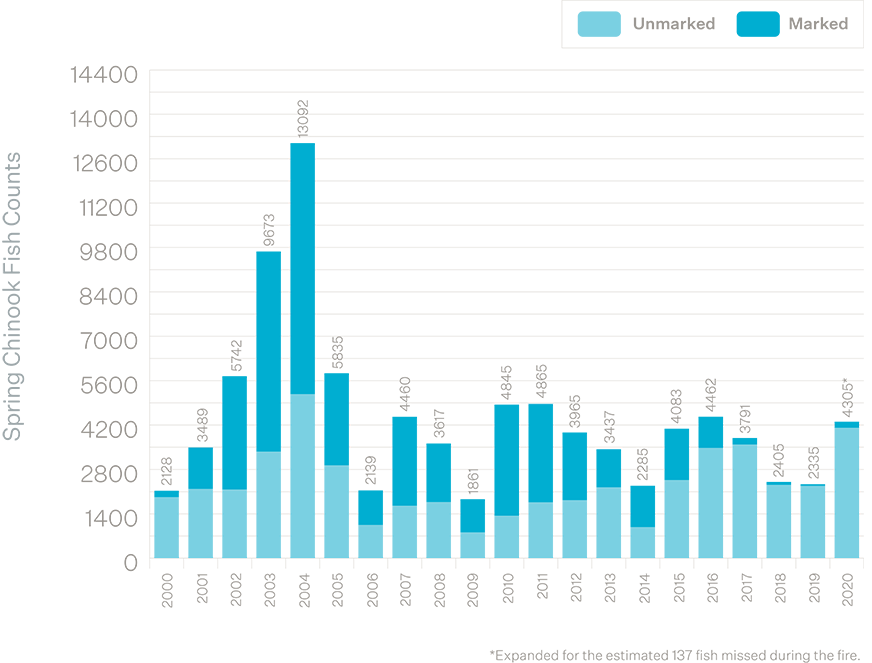 Sea-run cutthroat trout in the Clackamas are all wild fish. Entering the river in September and October, they average 12 to 18 inches in length and are found in the larger tributaries downstream of River Mill Dam.

While bull trout were historically present in the Clackamas River, the last known confirmed sighting was in 1963. The U.S. Fish and Wildlife Service, in conjunction with ODFW and many other partners, began reintroducing bull trout to the Clackamas in 2011. These fish have been encountered at the North Fork adult sorting facility following relocation from the Metolius River basin. 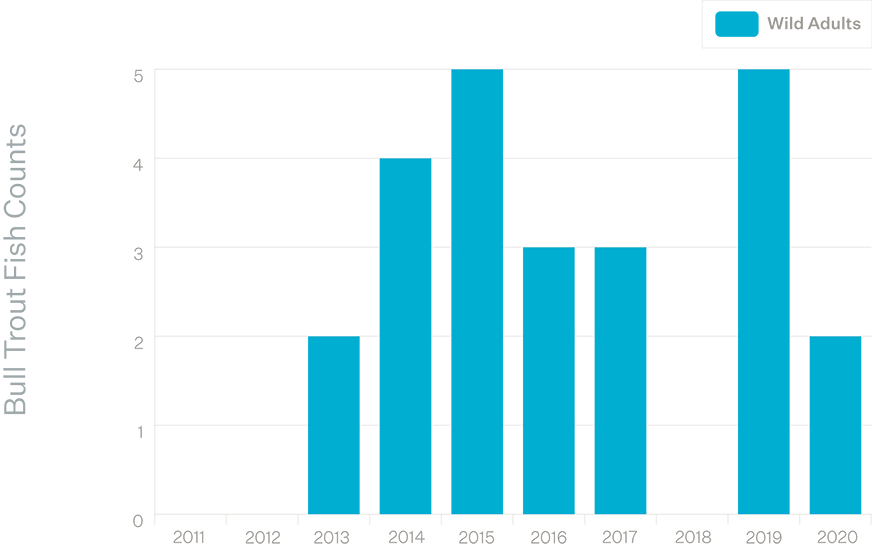 See what we're doing to help fish migrate safely along the Clackamas River every year while we power Oregon with clean, emissions-free hydropower.