With so much going on at the Pelton Round Butte Hydroelectric Project it can be hard to keep up. We want to make it easy for you, so visit this page often for regular updates about events, ongoing research and programs, and other topics of interest.

Black spots on fish: What do they mean?

So-called “black spot” is seen on fish throughout North America, including on the Deschutes River. Our fish biologists provide insight and context about black spot on the Deschutes and other Oregon rivers, how it happens, how it impacts fish, and what we hope to learn from current research.

It’s been a slow start throughout the Columbia River Basin, but spring Chinook have found their way back to the Deschutes River. To date, more than 2,500 adult spring Chinook salmon have returned to the Pelton Adult Fish Trap this year.

Of those returning, 20 are “upper basin” adults that were captured as smolts at the fish transfer facility above Round Butte Dam, released below the Pelton Round Butte Hydro project to continue their migration to the ocean, and have now returned to be passed above the dams.

Any salmon that originated in the upper basin is radio tagged and released into Lake Billy Chinook to continue their migration to their spawning grounds. Radio tagging the salmon allows biologists to track their movements and confirm their success in helping to build the next generation of wild fish on the Deschutes! 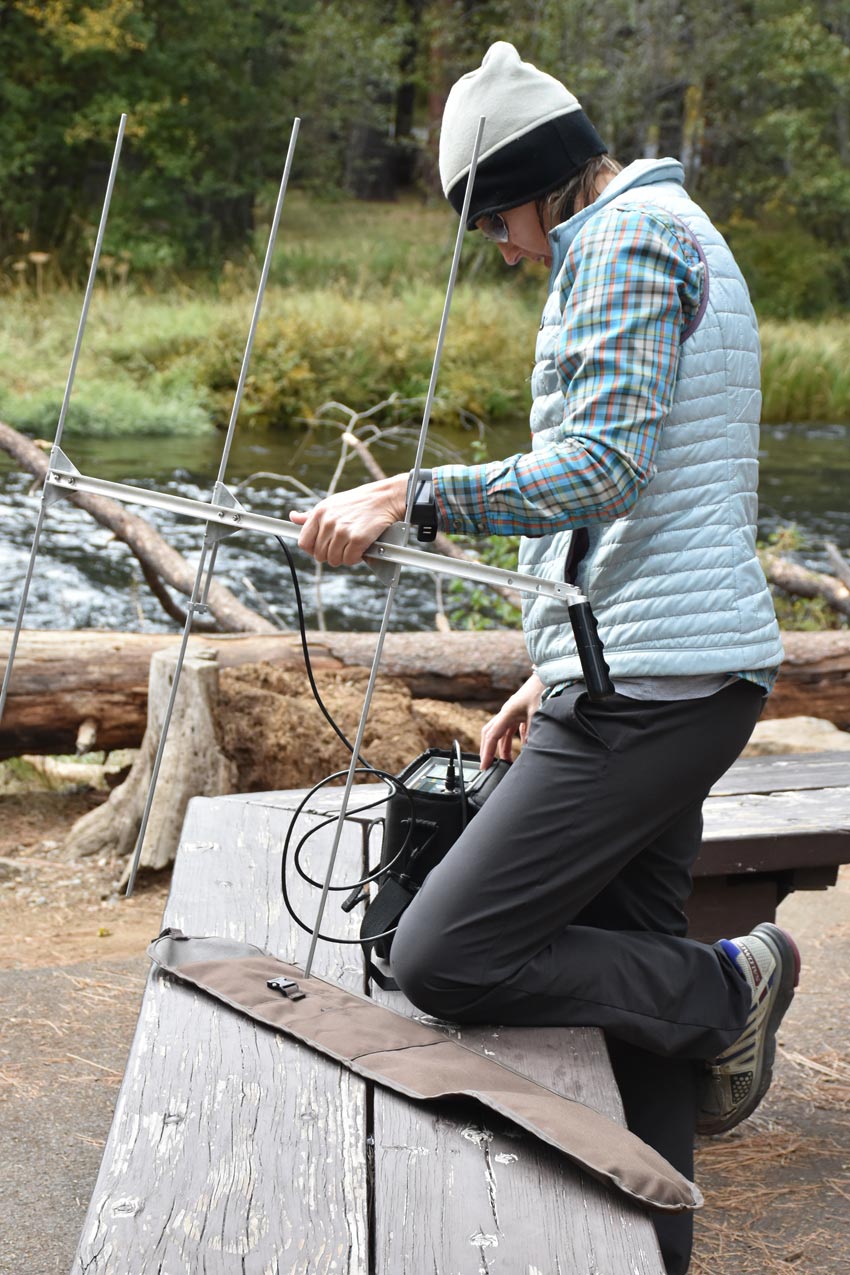 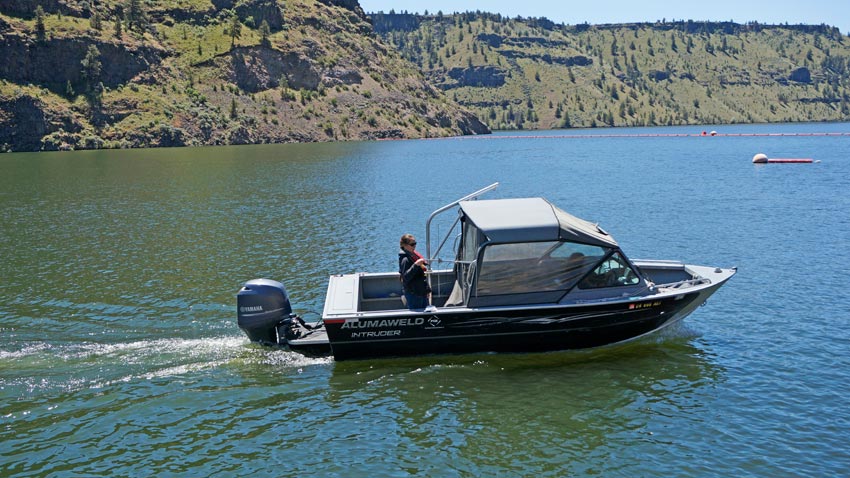 Ever wonder how much oxygen is in the interstitial spaces of spawning gravel – the tiny gaps between the small pieces of rock and sand in the beds where salmon and steelhead lay their eggs? You’re in luck if you do!

PGE’s water quality specialist, Lori Campbell, collects dissolved oxygen readings within redds just downstream of Project dams during the tail end of the spawning season (late June and mid October). This is done as part of the monitoring to verify the relationship between ambient (overlying river water) dissolved oxygen and dissolved oxygen in the gravels. 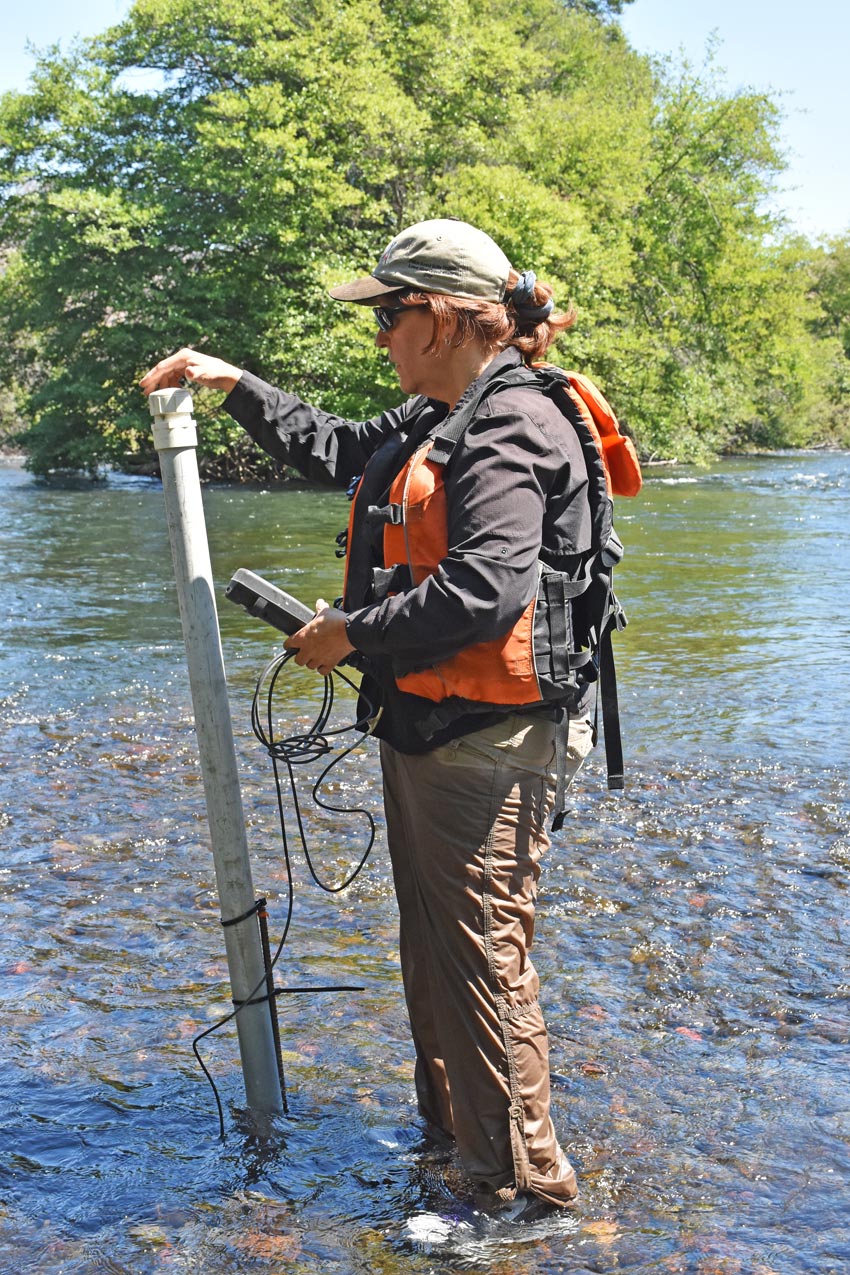 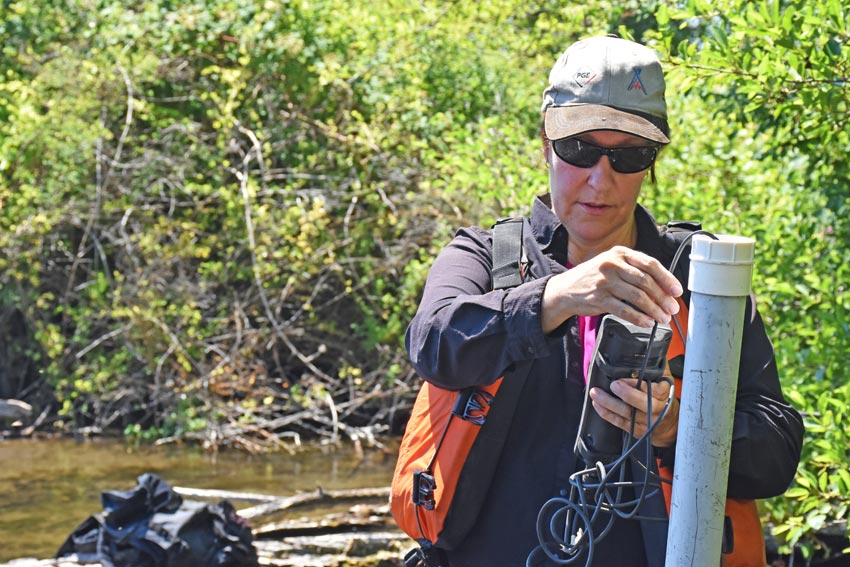 See the agenda for the upcoming workshop, June 27-28.

Download information on the topics and speakers at the 2017 workshop.

Rebekah Burchell, one of PGE’s fish biologists at the Pelton Round Butte Hydroelectric Project, spoke to the students about the reintroduction program, what salmon need to thrive and the importance of the fry release effort. These spring Chinook fry will spend about a year in the Metolius before they begin their migration to the ocean. After 2-4 years in the ocean they will enter freshwater again and eventually return to the Metolius River as adults to reproduce.

Adult Chinook from previous year’s release should start returning in May, when we will release them upstream of Round Butte Dam and follow them to their spawning grounds. In previous years we’ve located adult Chinook in the Metolius River, Crooked River and Whychus Creek.

Events like this are an essential way for multiple partner agencies and organizations, students, and volunteers to come together to help re-establish a naturally spawning population of anadromous fish to the Deschutes River Basin.

Additional spring Chinook fry releases will occur this year in Whychus Creek as part of the reintroduction program managed by PGE, the Confederated Tribes of Warm Springs, and the Oregon Department of Fish & Wildlife. 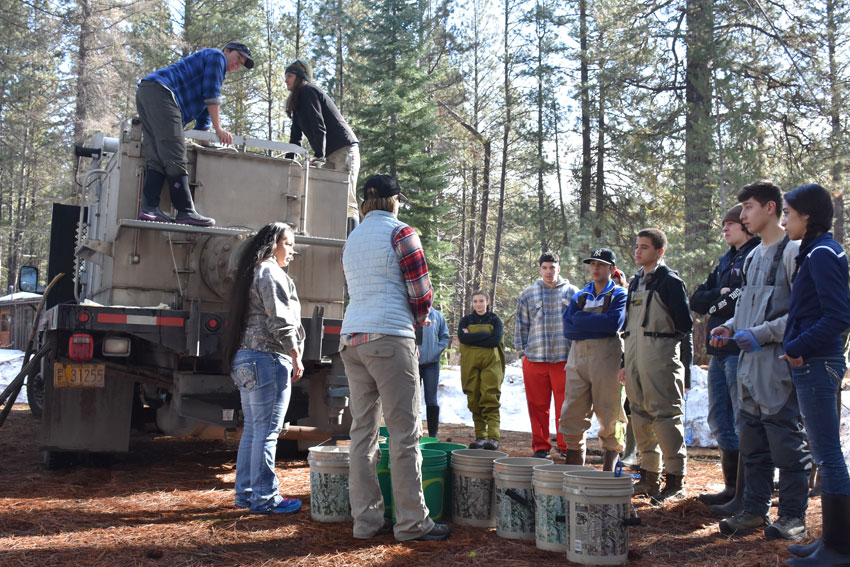 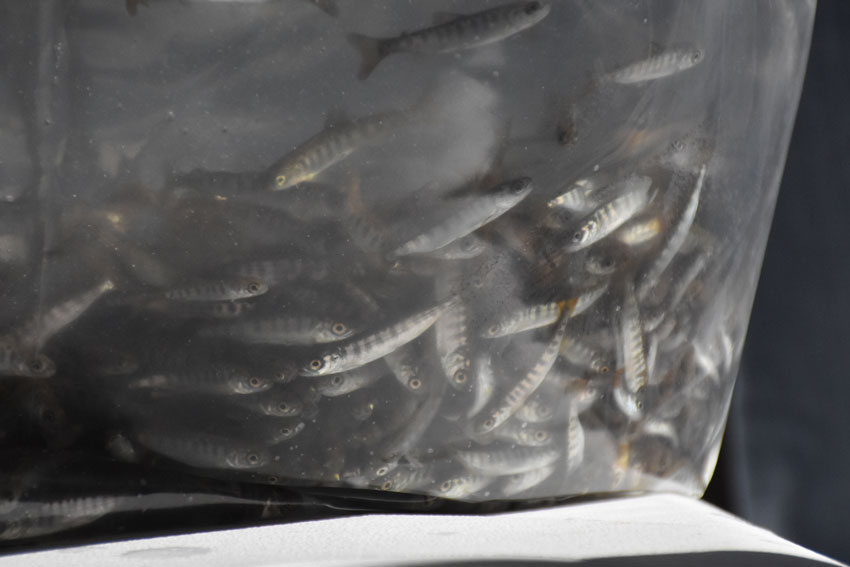 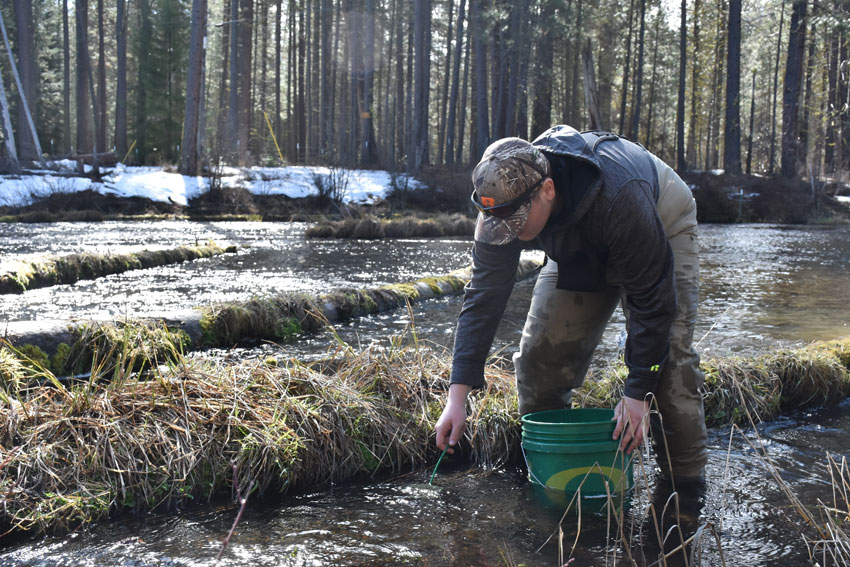 With spring approaching and the hustle and bustle around the office it’s clear field season is on the horizon. And that means that the fish are moving! At the Pelton Round Butte Hydroelectric Project’s juvenile fish passage facility, fish are collected and transferred downstream daily.

The fish passage system re-established the connection for anadromous steelhead, Chinook, and sockeye between the ocean and 250 stream miles of habitat in the upper Deschutes basin when it began operating in 2010. Although we collect and transport migratory fish all year, the peak season is from February through June. During this time any juvenile O. nerka (kokanee/sockeye) collected are transported to the lower river to continue their migration to the ocean. All migrating salmonids collected at the SWW are marked so we know they came from the upper basin when – hopefully – we see them again as returning adults in a couple of years.

Some fish also receive a PIT (Passive Integrated Transponder) tag. The PIT tag allows us to measure survival to the transfer facility from the tributaries and then travel time to Bonneville Dam. In 2016 we compared survival of radio-tagged smolts released during the day to those released after sunset. We saw much higher survival to the mouth of the Deschutes for fish released in the evening. As a result, this year we’ll be releasing all juvenile fish to the lower Deschutes in the evening to decrease mortality from predation. 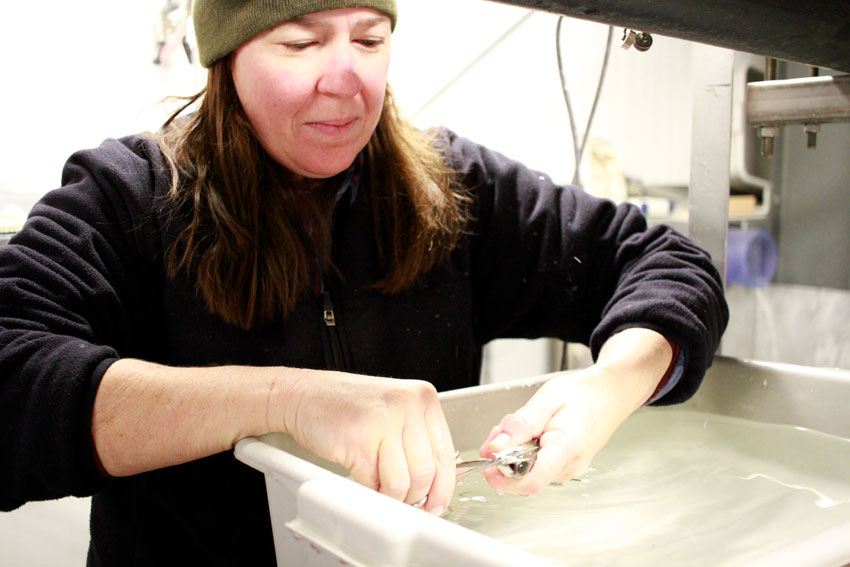 Over the course of the year, our technicians and biologists collect between 37,000 and 262,000 smolts and transport them to the lower Deschutes River to continue their downstream migration. It’s a system we’re steadily working to refine and improve. This year, for instance, we’re modifying operations at the hydro project to increase the number of fish captured by generating power at night, which means that water will be pulled through the collection facility, creating a more attractive current for salmon and steelhead.

Night-time generation will occur from March through June (peak fish migration) because fish would rather migrate at night, increasing the efficiency of the system. Stay tuned to our newsletter to find out the progress of night-time generation. And if you would like to see the fish collection and transfer facility in person please contact me (Lisa Dubisar) for a tour.

A Fish Committee meeting was held on Feb. 15. The meeting was attended by 5 natural resource agencies and 3 NGOs.

ODFW presented a summary of their work on Bakeoven and Buck Hollow creeks to understand the interactions between hatchery/wild O. mykiss redband/steelhead). The group discussed the how the study’s findings may have useful implications for the Pelton Round Butte steelhead reintroduction program.

PGE then presented their plan for 2017 redd counts in Whychus Creek. USFS suggested moving to a stratified design rather than the currently employed rotating panel design. After questions to insure that the new program was sampling representative habitat, the Fish Committee did not object to moving forward with the new sampling design.

ODFW presented results of the trout creel conducted in 2016 upstream of Maupin. While no prior creel data exists for this stretch of river, the creel results showed high capture rates, comparable to other blue ribbon trout streams. The creel will be repeated in 2017.

In addition to questions about the trout creel, ODFW answered questions for the Fish Committee regarding black spot disease history and observations in the Deschutes, and recent steelhead return rate data. These results and the ODFW trout growth and diet study will be presented at the public PGE Fisheries Workshop held on June 27 and 28.

Last month we posted a summary of the latest meeting of the Pelton Round Butte Fish Committee – the group of natural resource agencies and NGOs that typically meets monthly to advise the hydro project co-owners on management decisions affecting fisheries and water quality.

At the Jan. 17 meeting of the committee we reviewed the 2017 Draft Fish Passage Work Plan, which had been distributed to the committee last month for comment. The plan outlines the activities and scientific studies the co-owners will conduct this year.

PGE then provided a more in-depth presentation on the Nighttime Generation Plan, which is part of the work plan for this year and is aimed at increasing flow to attract juvenile fish to our downstream collection facility during the hours when the fish are most likely to travel.

Typically Round Butte generates the most during the day when there is the highest demand for power; however, we are learning that this pattern is not optimal for collecting juvenile fish, which tend to move at night. Results from statistical modeling and a pilot study in 2016 suggest that by generating at higher levels during the evening hours, we can significantly improve juvenile fish collection.

As a result in 2017 PGE and CTWS will modify operations at the project specifically to benefit fish collection, during the migratory season (March 15 to June 15). During this time frame, we will generate at higher levels during the hours when fish are most active (9 p.m. to 4 a.m.).

Fish collection numbers and behavior will be monitored using PIT and radio tags. The Fish Committee has been asked to provide comments on this study and the Fish Passage Work Plan by Jan. 25.

The Committee then had an in-depth discussion about Chinook and steelhead fry stocking locations. ODFW was looking for input on stocking strategies due to a shortage of Chinook fry and the potential for high spring time flows due to the higher than normal snowpack. ODFW received input from the Committee and will be providing their plan at the next Fish Committee meeting.

Megan Hill (PGE) then provided an update on the 2016 Lake Billy Chinook angler survey. The survey has been conducted most years since 1990 to monitor the bull trout and kokanee fisheries in the reservoir.

The next Fish Committee meeting is scheduled for Feb. 15. More information about the Fish Committee is available online, along with info about other partners we collaborate with in our work to benefit fish and water quality on the Deschutes.

An adult fall Chinook salmon, up close, is an impressive sight! Like the one pictured here, at the Pelton Trap. 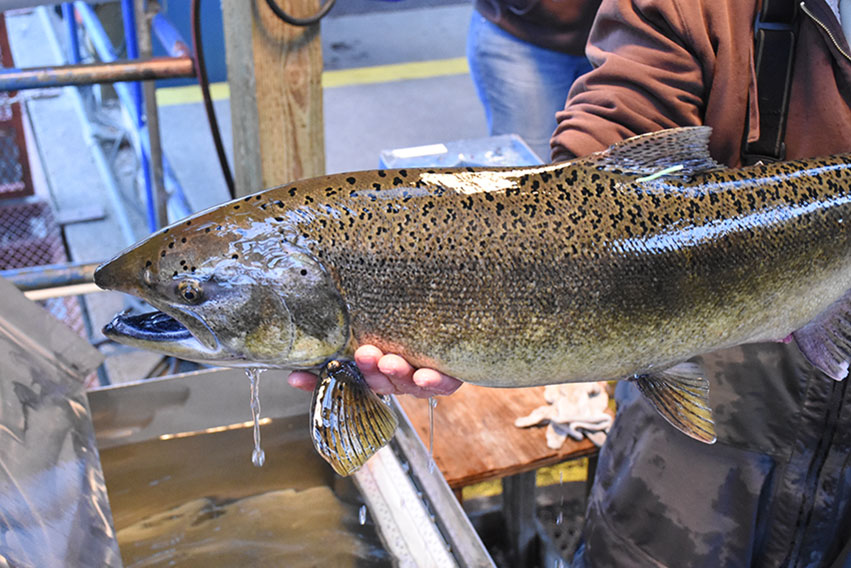 They’re native to the Deschutes River basin and spawn in the mainstem Deschutes River. Historically, their range extended up to the confluence of the Deschutes, Crooked and Metolius rivers. The majority of the spawning occurs in the three miles below the Pelton Re-regulating Dam.

Spring Chinook and fall Chinook are the same species but differ by the time of year when they enter fresh water. Spring Chinook enter freshwater…well…in the spring, when they begin their migration home from the ocean. Whereas fall Chinook enter during the fall. Fall Chinook are bigger because they spend more time in the ocean eating and growing. What’s even more impressive is their return in numbers to the Columbia River system, including the Deschutes River.

Fall Chinook are not one of the species targeted for reintroduction above the dams on the Deschutes, because that wasn’t their historic range (spring Chinook are part of the reintroduction effort, along with steelhead and sockeye).

Chinook salmon have played an integral role in tribal religion, culture,and physical sustenance for the people of the Warm Springs since time immemorial. Salmon are one of the traditional “First Foods” that are honored at tribal ceremonies. In part due to the cultural significance of these fish, The Confederated Tribes of Warm Springs (CTWS) has a rigorous fall Chinook monitoring program in the Deschutes basin. Find out more on our Fact Sheets, Studies & Resources page.