A wind storm has knocked out power to a large number of our customers and we are anticipating long repair times. Our crews will work around the clock until everyone’s power is restored. We know this is frustrating and appreciate your patience. Please check our outage map for updates.

How We Deliver Electricity

From the plant to you

High-capacity transmission lines carry electricity long distances, such as from the Boardman Plant in eastern Oregon to the Willamette Valley.

Transformers near the generation facility increase the voltage for more efficient transmission over long distances. These voltages are dangerous, which is why transmission lines are located on high towers.

As it gets closer to where it will be used, electricity is routed through transformers at distribution substations, which lower the voltage for safety in populated areas.

Often the electricity is lowered further via neighborhood transformers before passing into end-users’ service lines. Those voltages typically are 120/240 volts for homes and 480 volts for business and industry.

The health and scalable capacity of Oregon’s transmission system is therefore crucial to powering our future.

Transmission lines operate somewhat like interstate freeways that move large volumes of traffic. The lower-capacity distribution lines operate like streets that crisscross communities and neighborhoods. When freeways get congested, everything slows down.

In a similar way, transmission lines get congested and electricity cannot flow as reliably from the source of generation to your home or business. 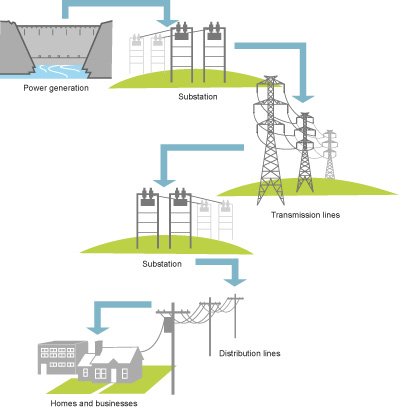 Electricity must travel a circuit to keep the electrons flowing. If it’s interrupted, electrons will stop flowing.

Learn how you and your kids can be safe around electricity.

We want your feedback

If you'd like to provide feedback on PGE's 2019 IRP or the IRP process, fill out our form.